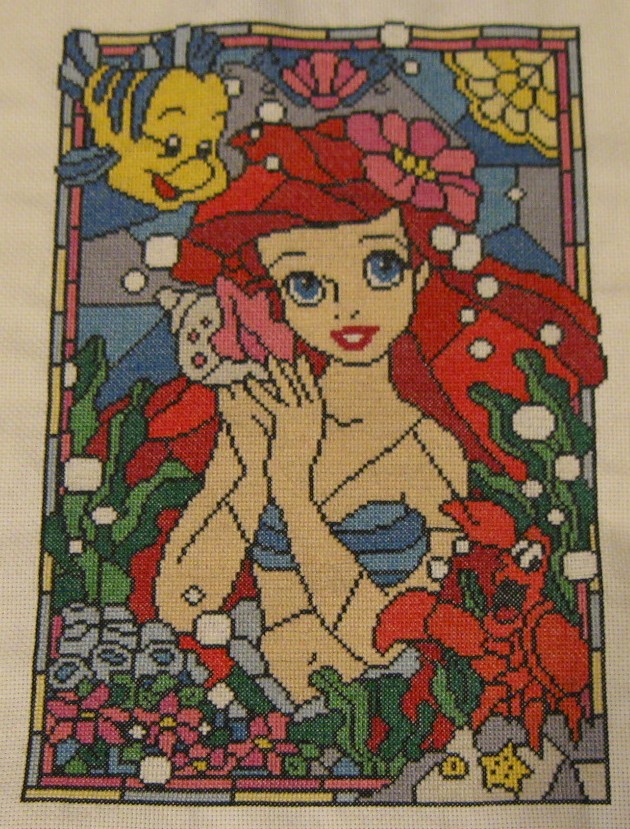 A Sailin' I Went

Edit:  I fogot to mention.  Sometimes it pays to be old and fat.  I guess it looked like I was going to pass out and we were pulled out of very long lines and put right thru the security posts.  That was nice.  I also added to the excursion trip story.

Hi Blogger Friends.  Well, I survived the airplane flights and no icebergs in the ocean.  We had a great time and it was nice to get away.  I can honestly say, that i walked more in those 8 days than I have in the last 3 years.  It was so nasty hot in Mexico.  90 degrees with 80% humidty.  Looked like we all just stepped out of the shower with our clothes on.
I enjoyed the cruise, but not sure it's something I would want to do again.  (Although, my in-laws told us if we each lose 75 lbs and I quit smoking, they would take us on a 14 day cruise to Hawaii.)  Something to think about. 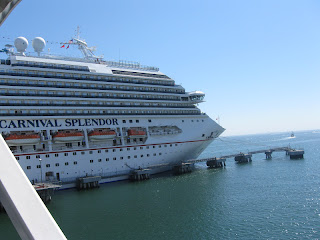 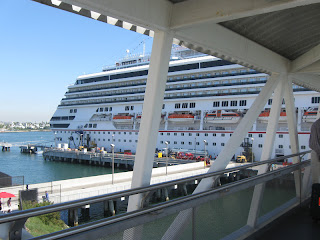 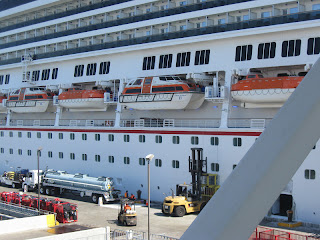 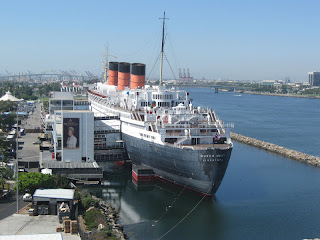 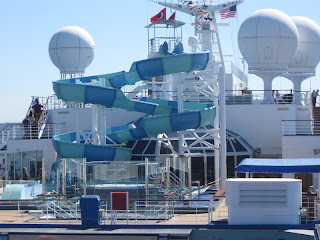 This next pictures are of Cabo San Lucas. 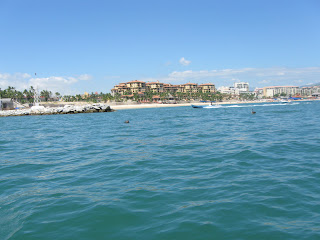 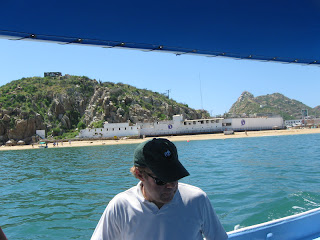 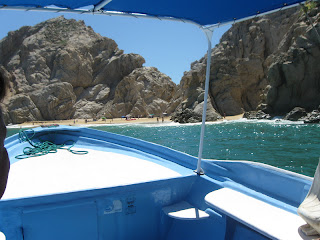 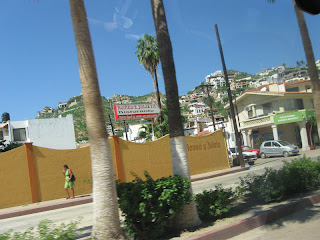 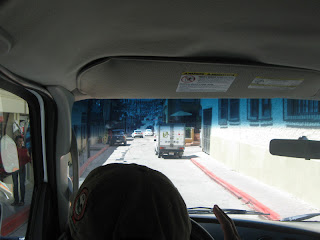 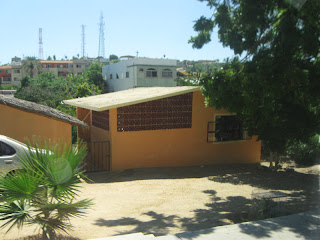 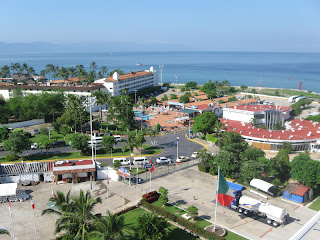 These next few pics are of a tour we took by boat called Rhythms of the Night.  We went to the very end of land in Banderas Bay to Las Caletas.  Only half of it has a road, the rest is only accessible by boat.  Part of it was once the private home of film director John Huston.  His home is now a restaurant and hotel.  The movie Night of the Iguanas was filmed there.  It was an hour ride with an open bar and great entertainment by the crew.  We had a great buffet under an open grass hut with dirt floors but cloth napkins.  We saw a show about the Mayan culture in dance.  It was awesome.  Below are some of the dancers in the show.
﻿
﻿ 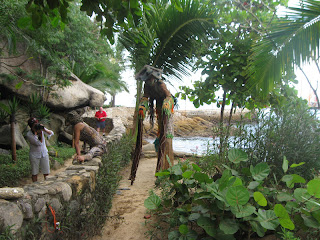 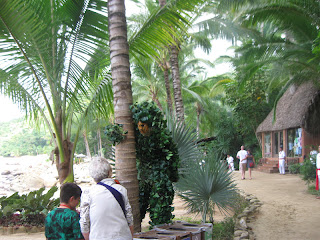 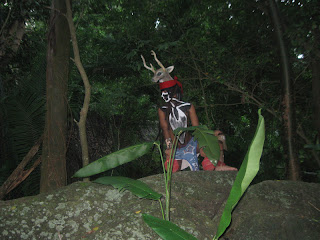 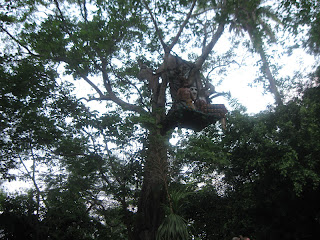 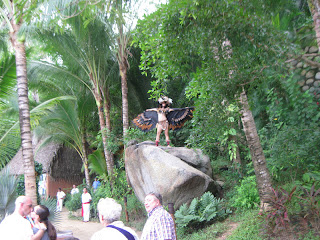 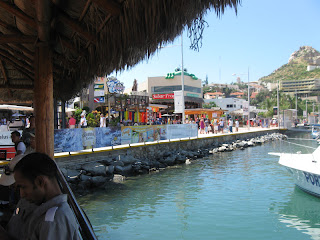 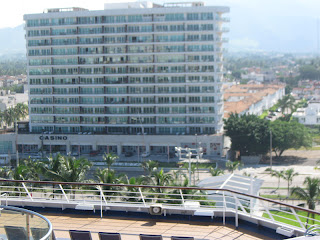 ﻿You can click on any picture to enlarge.  Hope to be back in a couple days with a tiny stitchy update.

Thanks for looking.  Linda
Posted by Linda at 1:23 PM

Yeah! What a fantastic blog post, Linda! That looked like a perfect stitching spot instead of just smoking spot. Now you're home and it's time to get that stitching mojo back to work! Great pic of you and DH. You both look so tan!

Yay!!!!! Finally some pics of the cruise - it looks fantastic. You must have had a wonderful time - I would be trying out for that Hawaiian cruise - Hawaii is heaven on a stick! I agree with Debbie - lovely pic of the two of you. How far south did you go? Because it the Aztecs were in Mexico but you mentioned seeing a show about the Maya culture?

awww what a lovely photo of you together :) and such a fab trip you took too :) glad you got back safely and hope you manage to get back into the normal hum drum routine of no animal shaped towels every night ..lol
love mouse xxxx

Beautiful photos. The towel animal is to cute:)

Looks like such fun! Too bad it was so hot though. Looks lovely though.

Great photos. Looks like you had a lovely time.

Lovely to see the pictures and glad you had a good time, don't know would I like that much heat all the time either, nice for a change. Lovely picture of you and dh and how cute are those animal towels ! Thanks for stopping by and your lovely comment.

Looks like you had a great time! No to sure I'd enjoy the hot weather too ☺

Thanks for the geographical update - sorry, it is just that I have published a history book about South America (when the Spanish invaded) and so I know a little bit about the area - so I just wanted to get a map in my head as to where you had been.

Also, I meant to say earlier that I absolutely adore the idea of the towel animals.

What a great trip, Linda--I've never been on a cruise... some day, hopefully :)

Wow, that looks like such a fun trip! Great photos.

Oh that looks like so much fun! I've never been on a cruise. Afraid I'd be sea sick.

Looks like a lovely trip. So may people love cruising its interesting to hear that you probably won't go on another one.

Wow, looks like you had an awesome time! Loved the pics :D

Wonderful pictures Linda! Looks like you had a blast!!

Oh wow..it all looks amazing. Sun, heat and holiday, who could ask for more. thank you for sharing xx

Wow what a holiday but that temperature in Mexico, whew!

Thank you for visiting my blog I am now going to look at your stitching on yours.

Oh my, such great views of the ship and of the places you visited.

I am so proud of you Linda!!! You did IT!!! Loved all your photos and sure looks like you had a great trip, regardless of the hot weather.
welcome back.
love Annette

Love your trip pics! We went on our first cruise last year. It was a 3 night cruise to the Bahamas and we loved it. I definitely want to do another one. Glad you had a good time.

Linda
Jackson, CA, United States
I am overly plump, bald, and retired. Been married to the love of my life for 20 years. We have bengal and sphynx cats and 2 miniature schnauzers. I love to cross stitch, crochet and work jigsaw puzzles. 20 year breast cancer survivor.